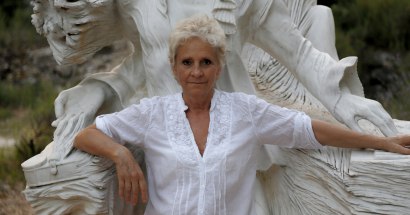 Maria de Faykod is of French nationality and was born in Hungary from a Swedish father, doctor of medecine, and from a Hungarian mother, professor of mathematics and physics.

Her talent as a sculptor expressed itself very early. At a young age, Maria de Faykod was aware that sculpture would be her deepest, her most complete way of expression. At the age of sixteen, she already received her first orders and committed herself completely to the creation.
Her art is connected with the tradition of the "Beauty” of the great civilizations, but her creative sensitivity already introduces us into a new approach which she formulated in this way: "it is not a question of expressing the temporary phenomena of this visible world, but of penetrating under the subtle layers of another reality where an upper order shows itself, that of the spiritual order. "

In 1975, she settled down in Paris, as a political refugee.
In 1978, she started the National Fine Arts Academy in Paris. Simultaneously, she deepened her philosophic and metaphysical knowledge at the Sorbonne.
From 1975 till 1985, her appeal for marble brought her to split her time of creation between Paris and Carrare. She works in direct carving in marble blocks. In this regard she wrote: "it is this material which contains in itself its fourth dimension, a total vibration of the universal time. […] The marble is a complete support of the free creation, it possesses a double reality of a different order. There is in this one the geological time, the petrified organic substance, but it also contains the light, the spiritual memory of the alive. "
She has participated in numerous exhibitions, most of the time as guest of honor, in France and abroad and has received numerous awards.
From 1985 till 1988, her works were permanently shown in Paris in the GALLERY DE FAYKOD. Her monumental sculptures decorate the squares of several major cities (National Monument to the Escapees of War, 16th District of Paris). We also meet them in museums and in private collections.

In 1988, she left Paris to settle down in the Provence where she created her museum. Situated near the village of Aups, the MUSEUM DE FAYKOD was inaugurated in July 1996.
This open air museum is part of an innovative movement in favour of the protection of the nature through art, thanks to its principle of particular arrangement according to which art and nature are intrinsically linked. Their role in the world balance developed the ability to recognize beauty and allowed to live it through art, what is an essential factor of this equilibrium. The relationship between the works of art and the essential human values takes back all its meaning and beauty becomes again the very purpose of art.
This park of sculptures, in its natural environment, offers a contemplative pathway and, at the same time, an educational aspect where elements seem to be put in symbiosis with the works.

The sculptures represent human bodies which show the ancient print of classic art, of truth and of beauty with, besides, an evocation of the energy which reflects the transcendence of the material, making visible what is invisible.
By the delicacy of the features, the strength and the subtlety give works an exceptional power. The message in the stone, expressed in a very pure way thanks to the marble, only tells about fervor, flight, inspiration, states the deep reality of man and universe, and establishes through it the foundation of a new intuition on reality.